The Top 5 Reasons Electric Bikes are So Popular in Napa

1) We’re here to tell you, any stigma about riding electric bikes is GONE!

It’s funny to think about now, but just a few years ago our bike rental and tour guests were mostly unfamiliar and strangely unreceptive to the idea of electric bikes.

Most often, they would see eBikes available for rent at our shop and ask about them. Our staff would excitedly describe the amazing pedal-assist technology that makes the pedaling easier so they could ride farther and faster and suggest they should try one, but most people would respond with polite laughter and say, “Oh no, that’s okay, we want to get the exercise.”

It’s taken a few years for opinions to shift, but that hesitation is definitely GONE and we can tell you, eBikes are more popular than ever!

Now we find most people fall into one of two camps: They’ve either tried an eBike and are totally hooked or they’ve heard the buzz and can’t wait to try one!

What’s more, people finally seem to understand that you can definitely still get decent exercise while riding an eBike! No matter your fitness level, an electric bike just gives you the power to amplify your speed and distance capabilities.

Both of our shops located in Downtown Napa and Yountville feature Electric Bikes available for rent. Guests love the Pedal-Assist Technology that allows you to pedal naturally with the aid of the motor seamlessly – and silently! – kicking in to boost each pedal stroke.

Reservations have become a must for our popular Electric Bike rentals and guided tours, especially for weekends when it’s not uncommon for our eBikes to be fully booked. 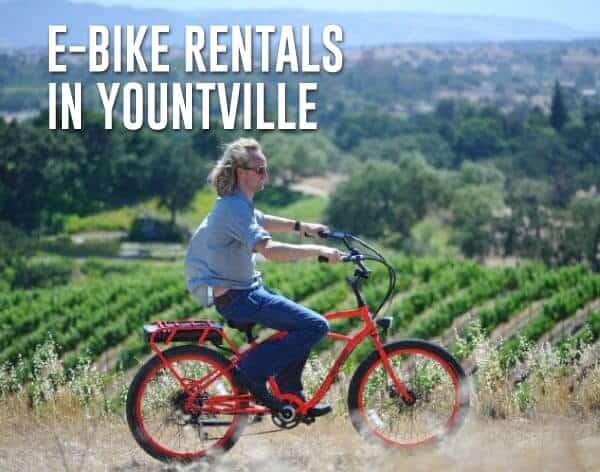 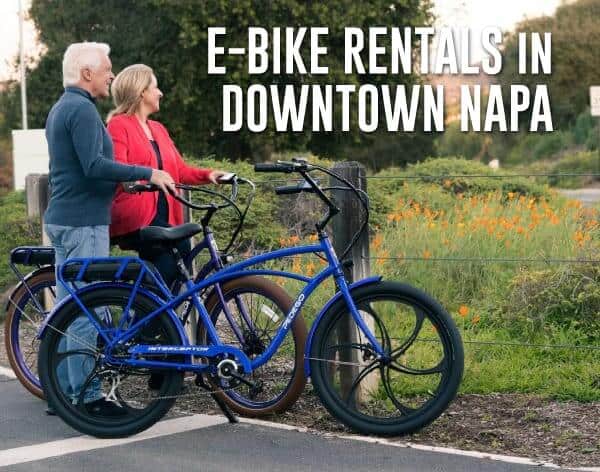 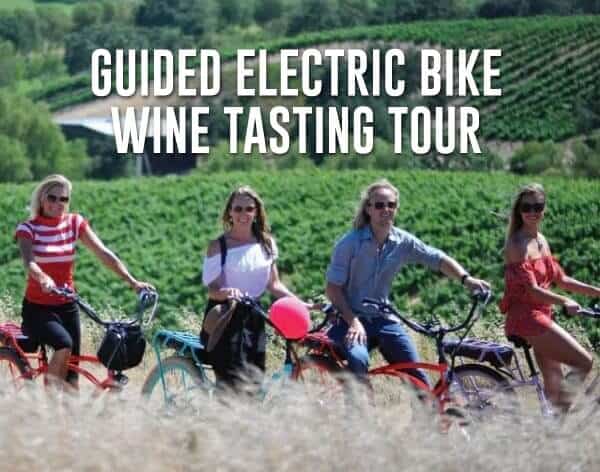 2) You can ride farther (and faster) than you thought possible

One of the best things about Electric Bikes is that you can cover MUCH more ground than you’d be able to under your own pedal power alone. The majority of our bike tour and rental guests are casual riders who haven’t ridden a bike in a while. That means on conventional bikes, they’re comfortable riding an average of 3-5 miles between stops at local wineries, rounding out the day at a total somewhere close to 15 miles.

Put those riders on our eBikes, however, and the same guests who were laughing at the start of the day, admitting, “I can’t remember the last time I rode a bike!” will easily be able cover double the distance (or more) while laughing and whooping it up the whole way. That’s right, 30+ miles is no big deal on our Electric Bikes.

This has been especially great for guests coming to us with specific wineries they want to visit by bike that might have been out of reach for them on regular bikes. Where we used to hesitate or warn guests they might be biting off more than they can chew, we can now send them out on eBikes with the confidence that not only can they easily complete the ride, but they’ll have an absolute blast doing it!

The powerful motor provides assistance as you cruise at speeds up to 20mph. The 20mph cutoff is an important distinction that makes our electric rental bikes legal to ride on designated bike paths such at the Napa Valley Vine Trail.

Another reason our Electric Bike rentals have become so popular is that with the power of the motor assisting your effort, biking can literally become a “No sweat” activity (if you want it to).

Although wine country is generally pretty casual and none of the wineries have a strict dress code, we definitely understand when we hear from guests who are concerned about what to wear during their bike tour through Napa – there’s a desire to strike a balance between being comfortable enough for biking without looking too casual while at the wineries, which often have elegantly appointed tasting rooms.

Electric bikes make it easy to dress a little more upscale without worrying about becoming a sweaty mess as the day goes on.

At our tour and rental shops in the Napa Valley, we host a lot of groups including families whose members span a wide range of ages and ability levels when it comes to biking.

We also often see groups who want to ride together, but learn that Uncle Stewart is recovering from knee surgery, or just not confident he’ll be able to keep up. Electric Bikes have saved more than a few group excursions that may have otherwise been cancelled due to the riding limitations of one member of the party.

We’ve also seen electric bikes become an effective tool for couples where one partner is more of an avid cyclist and the other, not so much. These couples always come back totally jazzed that they were able to ride together in a way that made it fun for both of them!

Plain & Simple: It’s impossible to ride one of our Electric Bikes without smiling. The effect is immediate and universal. People truly fall in love from the moment they get on these incredible bikes; in fact, we even started calling the phenomenon “Love at first ride!”

So whether you’re considering renting electric bikes on your own or joining us for a guided tour on electric bikes, we look forward to sharing the exciting new world of eBikes with you!